On Her Own Terms: Sidney Rielly Is Leaving A Legacy At Portland State 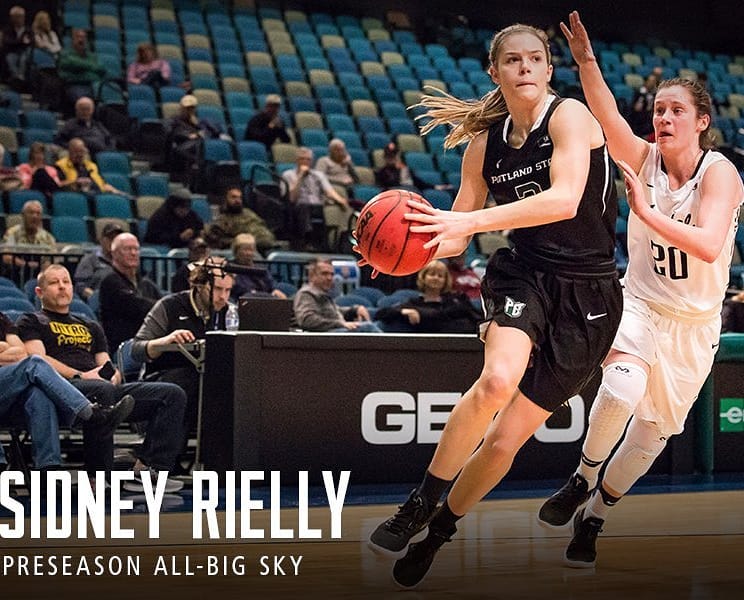 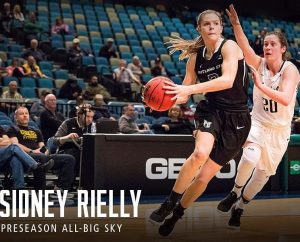 Four years ago Sidney Rielly was at a crossroads. She was completing her freshman year at Santa Clara, a school where she had fallen in love with both the academics and campus lifestyle. The only thing that didn’t feel right was her role with the basketball program. 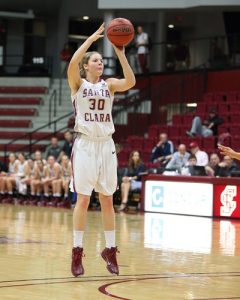 “The coach who had recruited her had been trying to build an up-tempo, fast paced team,” explained Rielly’s dad Greg. “Right before her freshman year, that coach’s contract wasn’t renewed and a new staff came in who wanted to play a slower, grind it out style.”

Before her freshman season even began Rielly considered re-opening her recruitment but the lure of Santa Clara as a school was too much to pass on. She remained committed to the program despite the coaching change. By the end of her freshman season, however, it was becoming clear to her that it wasn’t going to work out.

“I spoke to the coaches at Santa Clara about what Sidney could do to improve and help them win,” explained Rielly’s long-time trainer and mentor Donald Watts. “I was told if Sidney ever wanted to be a high-level scorer in college she would have to transfer to a division II school. That she wasn’t good enough to play that role at the division I level.” 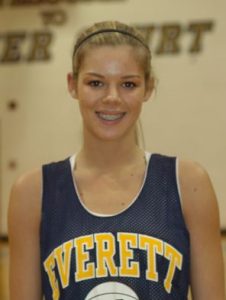 Rielly While At Everett High School (Via Seattle Times)

Scoring was not something Rielly struggled with in her prep career. She had become the all-time leading scorer at Everett High School, but as a freshman on Santa Clara she averaged under four points per game. While a difficult transition from the prep to college game is nothing new, being told she wasn’t good enough to be a scorer at the division I level meant that the coaching staff didn’t see her fitting into their long-term plans in a way that fulfilled her goals. Knowing she loved everything about Santa Clara besides her role in the basketball program, Rielly struggled to decide what to do. She went as far to contemplate quitting basketball altogether.

“She loved Santa Clara!” Greg Rielly says of his daughter’s thought process during that time. “She loved the campus, her classes, her classmates, her teammates, everything. She was just frustrated with the basketball side of things. I told her though, if such a large portion of your life is going to be dedicated to basketball then you have to love it. Otherwise no matter what else is going right in your life, you will always feel frustrated.”

Finally, after a lot of careful thought, Rielly decided to transfer. Almost the instant it became known that she was looking for a new program, she had Lynn Kennedy recruiting her to join Portland State.

“I Started watching Sidney when she was still in high school,” explained Kennedy of what drew him to Rielly. “She was always a great player. She can elevate, is a great shooter, can play at a fast pace and just fit our fast break style perfectly.”

Kennedy had just been named as the new head coach of the Vikings. A program that had seen success at the start of the decade but had fallen to the bottom of the conference in recent years. 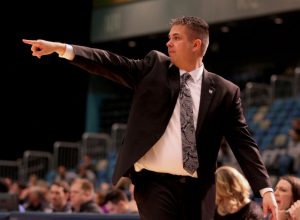 “When I arrived at Portland State we only had three players on campus,” said Coach Kennedy. “Players were transferring. It was chaos.”

For Rielly, knowing that she would be leaving Santa Clara for a program that was in chaos from the previous year didn’t phase her. She had a simple reason for making the leap of faith.

“I came because of Coach Kennedy and his system,” said Rielly of why she chose the Vikings. “I had known players who had played for him; the style he wanted with a lot of transition and fast tempo; things I really like as a player.”

After redshirting the 2015-’16 season as a transfer, Rielly, along with fellow transfers Ashley Bolston and Courtney West, set to work returning Portland State to prominence.

“The first year I was coach the team won four games,” Says Coach Kennedy about the importance of the trio. “The next season, with Sidney, Ashley and Courtney, we won 16. I can’t say enough about their leadership and work ethic.”

For Rielly, that work ethic took her from being told she could never be a lead scorer at the Division I level, to leading all guards in the nation in field goal percentage her first year as a Viking. Her blistering 53 percent accuracy that season was just ahead of the first pick in that year’s WNBA draft, Kelsey Plum. In her two seasons in Portland, Rielly is averaging 16 points per game on 49.4% shooting. That success hasn’t stopped her from working to get even better. 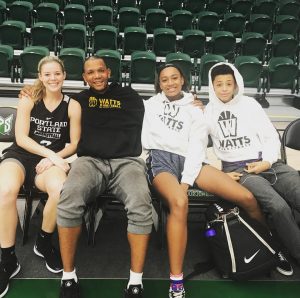 Rielly with Donald Watts and his family at a recent practice

“I spent this offseason working with Donald Watts on my point guard skills, handling the ball under pressure, decision making and being aggressive,” Rielly explains about her preparation for her senior campaign.

“With the coaching staff at Portland State I focused on improving my midrange game. I’m known as a three-point shooter and it’s important to be able to keep the defense off balance by being just as effective in the mid-range.”

According to Coach Kennedy, Rielly’s work ethic has always been a standout feature of who she is as a player and teammate.

“Rielly has always been a great leader on the court with the example she sets,” says Coach Kennedy “She spends extra time before and after practice working on her game and she’s always watching film, always looking for ways to improve.”

That drive to improve comes from both an individual and team perspective for Sidney.

“Seeing the work I put in translate to on the court and in game success keeps me motivated to keep working,” she says. “Seeing how it helps not only myself but my team be successful is incredibly motivating.”

“When I first recruited her we talked about personal goals,” Says Coach Kennedy. “She’s surpassed all of them.”

As Rielly, who was recently named to the Big Sky pre-season all-conference team heads into her senior campaign, there remains one goal that her and the rest of the Vikings are chasing.

“We want to win the Big Sky Championship and earn Portland State its first NCAA tournament appearance since 2010,” Says Rielly. “To take a team in three years from last in the conference to league champions would be a great statement and legacy for our seniors especially.”

Coach Kennedy has no doubt that the leadership that Rielly and her fellow seniors bring can make that a reality.

“We’ve been one game away the last two years, Says Kennedy. “If we play one game at a time we have a real shot at cutting down nets. I know with our senior leadership that a conference championship and an NCAA tournament berth is a real possibility.”

Now, four years removed from having to make the tough decision to transfer because she was told she wasn’t good enough, Rielly is poised to leave a basketball legacy that many can only dream of.

“It’s deja vu,” says her dad Greg of his daughter’s career. “When she entered high school she was told choosing to play at Everett was a mistake. The program didn’t win. It would hurt her recruitment. By her senior year they were a state title contender, she was the all-time leading scorer and she had a scholarship to the school she wanted. When she transferred from Santa Clara to Portland State she was told the same thing. The Vikings don’t win. You’ll hurt your career. Now they are picked to finish second in the conference and have a chance to potentially make the NCAA tournament and Sidney is named pre-season all conference.” 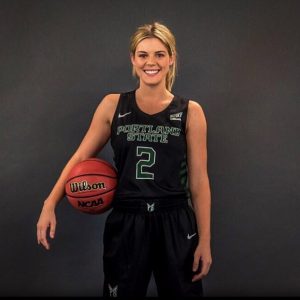 With her senior campaign under two weeks away, Rielly has given some thought as to what she wants next in her life.

“Ideally I’d like to play overseas, maybe in Australia or Europe if the opportunity presents itself. Right now though, I’m just focused on Portland State basketball.”

That focus should help take the Vikings all the way to that elusive championship.