Tryouts are one of the most exciting and nerve wracking times of the year. Slick Watts knows better than most. He turned an open tryout in front of one of his childhood heroes, Bill Russell, into a record breaking NBA career. Whether you have been through tryouts before or are new to the process, there are several points of focus that every player needs to be aware of and take seriously  to have the best experience possible and to put themselves in the best position to make the final roster.

When it comes to how far in advance you should start preparing, Coach Slick put it best, “Two summers ago. Even earlier if possible.”
Simply put, the sooner you begin to prepare, the better prepared you will be. Don’t wait until a week before tryouts to begin working on your game. Especially if you have taken time off to let your body recover from injury or to play another sport. While increasing how much you train and working with a trainer close to tryouts is a good idea, thinking you can wait until a week before tryouts to start preparing will not get you the results you want. Instead, start preparing today if you haven’t already. The best time to start doing something positive is always in the past but the second best time is right now!

Every player will tell you the hardest part of practice is running. Wether it be sets of lines, full-court layups, sweet 16’s etc. Running is something every player has complained about during practices and it is even more intense during tryouts.
“Coaches want to know that you are in shape for the season. It’s great that you can go and score 10 points in the first quarter, but if you’re gassed by the second quarter, or even the 4th quarter the coach can’t rely on you and you’ll be lucky to make the team. Even if you do, you won’t play much because the coach will be worried you’ll get tired and not be able to deliver when the team needs you to.”

3. Focus on Your Fundamentals First 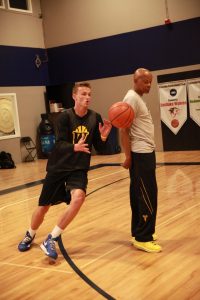 It is cliche but the fact is the most important thing to work on are your fundamental skills. Ask any player or coach who has had any success and they will tell you the same thing.
“One of the biggest misconceptions I have seen is players thinking they have to be fancy in tryouts in order to make the team,” said Coach Slick. “They think a bunch of fancy and needless dribbling or spectacular looking move and shots will get them on the final roster. Coaches don’t care about any of that! Just because you do something that would make your friends go ‘OOH and AH’ doesn’t mean you’re a good basketball player. Keep it simple, work hard and realize that the friends who went ‘ooh and ah’ are sitting in the stands. If they aren’t good enough to even tryout for the team their opinion of your skills shouldn’t be that important to you.”

These are three things you can control no matter how good everyone else is in comparison to you. Wether you are a returning star player or are trying to make the team for the first time, your attitude shows the coach and your potential teammates what type of player you will be. 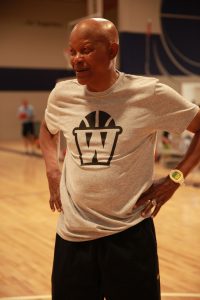 “If you come in with a negative attitude of ‘I’m not good enough. I messed up. Coach is out to get me’ I can promise you that your coach won’t want you on the team and the other players won’t want you either,” says Coach Slick. “Likewise, if you come in thinking ‘I’m so much better than everybody! This drill is beneath me! I don’t need to do this or put everything I have into this because I have already proven myself!’ I can promise you the same thing. Coaches and players want positive, selfless and confident players. Not somebody whose attitude can drag down the moral of the rest of the team and cause a toxic environment. Stay positive, stay motivated and you will reap the benefits and have a better chance of making the final roster.
The same goes for body language and effort. If you walk around moping with you shoulders slumped or make a big physical display or roll your eyes every time something doesn’t go your way, the coaches won’t want you on the team and the other players won’t want you anywhere near them. If your body language sucks, it reflects horribly on you. Make the effort to hold your head high, stay positive and people will want you on their team.”

When you are on the court you want to be communicating with your teammates. “Call out screens, where you are on defense, tell your teammates to use the screen you’re setting for them, communicate the opponents’ defensive schemes if you recognize them,” Slick states with a passion. “Coaches need to hear you talking on offense and defense and sharing the relevant information with your teammates to make sure everyone is where they need to be. Make sure you are LOUD so everyone can hear you. It shows leadership, willingness to play a roll and a high basketball IQ or to least a willingness to learn.”

Next is something a lot of players are embarrassed to do; ask questions of the coach. Coach Slick puts it in simple terms, “Ask the coach Questions. They love it when you  ask questions because they get to do their job and teach you.”
Slick says the worst thing you can do is stay silent. “Don’t pretend you understand something when you don’t and then try and fake your way through it. Coaches and players will instantly be able to tell you don’t have a clue what you are doing. Also, that you don’t have enough confidence in yourself to admit that and are willing to lie rather than do what’s right for the team. Both those are huge red flags and will go a long way in preventing you from making the team you want.”
Trying to fake your way through something instead of asking your coach to explain it multiple times is a sure fire way to not make a team.

With The Other Players

If you want to get yourself ready for the season, join Watts Basketball for our 8, 16 or unlimited session Tryout Prep programs! You will work with the best coaches and trainers around to get your game fine tuned to give yourself the best chance to reach your goals!