We love to see the success that comes to trainees that we have consistently worked with. It’s always nice to see the hard work and efforts pay off. That is exactly what has happened with Watts trainee, Sidney Rielly who is currently a junior at Portland State University. According to the Everett Herald, Rielly has become “one of the best players in the Big Sky Conference”. In just one season, she was able to increase her average points per game by nearly five times in less than two seasons. How did she do it you ask?
The answer to this question is easy: the Watts Recipe. Coach Donald Watts has worked closely with Rielly since she was in high school, but he used the same recipe that is used with athletes of all ages.
The ingredients to this recipe include:

Rielly had all of these ingredients. Although she improved her average points per game and many athletes would be content with the improvement, she wanted to be known as more than just a shooter; she needed to make her game complete. Rielly had the desire to improve. She also knew exactly what she needed to work on, at least to start out with. Rielly mentions in the Everett Herald article, “I wanted to improve on my ball handling and get my turnovers down, and I wanted to have an attacking option other than just taking shots.” So that’s where her and Watts started, but they also worked on footwork and ball positioning as well as running two-on-one drills to figure out how to get out of traps by dribbling. With every training, they didn’t avoid any of the failures and frustrations that came about because in order to improve, those things have to be addressed. With the proper encouragement and goal setting, Rielly has an even higher average points per game at 20.2 points, according to the Everett Herald, while also doubling her trips to the free-throw line. (To read the whole article on Rielly, click here) 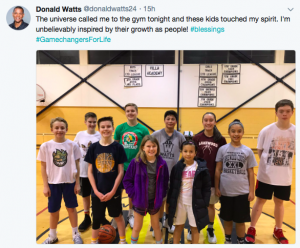 As previously mentioned, this recipe is taught to athletes of all ages at Watts Basketball. The earlier this is introduced, the more success and improvements we see every single day. When we’re able to work with athletes that are only in third grade that have the same motivation as someone who is a junior in college, it motivates us to keep doing what we do at Watts Basketball. It’s incredible because we know the success that is going to come to all of these players as long as they have the right encouragement and stick to working hard and enjoy achieving their goals.

Click here to check out the schedule for our upcoming school’s our clinics!

Watts Basketball is Seattle’s premiere institution for player development. Through basketball, we teach strength, concentration, tenacity, and enjoyment of the game. We do all this because we believe basketball skills empower personal growth. That’s what makes us Gamechangers. For Life.

For some fresh Watts gear hit up the Shop.
Stay connected with Watts via:
WATTSUP Vlog
The Real Spill