“It’s All About The Process” Matt Poplawski’s Story

A decade ago, Matt Poplawski knew he had to improve his game. Fortunately, he also knew why.

“I was small and needed to learn how to find my shot against the bigger guys,” the recent Penn graduate said. “I was 5 foot 3.”

Matt was attending the Overlake School in Redmond when he and his two older brothers began working with Donald Watts and Watts Basketball. Matt credits the long-term relationship – he worked with Donald through college – with helping him become a starting point guard in high school, gaining admission to the Ivy League institution, and starting a professional career in soccer.

Matt, who graduated from Penn in May 2017 and immediately joined the semi-pro Burlingame Dragons, found more than his shot at Watts Basketball. 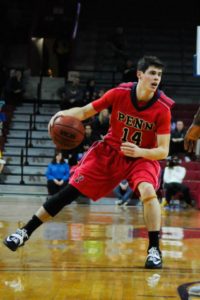 “I figured out how to get my shot against bigger guys,” Matt said. “But Donald also helped me with school, with soccer, and with life in general.”

How does a basketball trainer, even one as accomplished as Watts – the 1995 state player of the year and a former University of Washington standout – so influence a person’s development?

“It’s all about the process,” Matt said, “forcing me to set goals and holding me accountable for reaching them.”

Many of Matt’s goals were short-term, such as becoming more creative as a ball-handler. However, he also applied what he learned to his academics, simply by establishing day-to-day goals.

“I knew what I wanted to accomplish, both in practice and during games, whether I was trying to get to the hoop more or play better defense. And I used those lessons with school, too.”

The schoolwork paid off, as evidenced by four successful years at Penn that included a return to Seattle to play against the UW and Seattle University. After graduating, he wasn’t ready to start working in an office yet. So when he had the chance to play soccer at a higher level, he grabbed it. When we spoke, Matt and the Dragons – a team based just south of San Francisco that competes in the same league as the under-23 club of the MLS Seattle Sounders – were hours away from playing a match.

Despite his successes, surely Matt faced some adversity?

“Oh yeah,” he said. “During my junior year at the Lakeside School, I was in and out of the starting lineup, and I lost my confidence. So I talked to Donald, and he got me back on track in a couple of ways.

“One, and at this Donald’s the best around, was with my jump shot,” Matt recalled. “He always says, ‘wherever you’re shooting from, your jumper has to be the same.’ And two, he pushed me to change my approach, pushed the team-first concept. I became more vocal with my teammates, and more competitive.

“Basically, he convinced me I could compete at the highest level, and then he taught me how to do it.”

Watts Basketball is Seattle’s premiere institution for player development. Through basketball, we teach strength, concentration, tenacity, and enjoyment of the game. We do all this because we believe basketball skills empower personal growth. That’s what makes us Gamechangers. For Life. To sign up for classes, camps, and clinics visit Programs.
For some fresh Watts gear hit up the Shop.
Stay connected with Watts via:
WATTSUP Vlog
The Real Spill