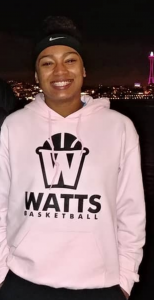 Each week, Watts Basketball highlights the efforts of one of our young female or male trainees who have translated the skills and lessons they have learned from Watts and applied them on and off the court. This week we feature Mt Rainer High School freshman, Jadyn Watts.

Freshman year of high school brings many new challenges. For athletes in particular, the transition from middle school to high school can be extremely difficult. For many, it is their first taste of going through intense tryouts where a poor performance could cost not only a spot on varsity, but a spot on any team. For Jadyn Watts, the transition proved easier than expected due to her years of training with Watts Basketball

“I felt ready because what we did in tryouts wasn’t anything I hadn’t done before because of the training I had had” she explained, “If there was a drill that was new to me it was similar enough that I didn’t struggle.”

That knowledge and confidence she had gained through her Watts training paid off as she not only made varsity, but was name a starter before the season. In an unexpected twist, when it was game time, the nerves showed up and made an impact.

“We were all a little nervous going into our first game” Jadyn said of the team’s first taste of high school varsity. “We had players coming back from injury and it was a new experience. Personally it wasn’t a good game for me because I didn’t play the way I new I could.” 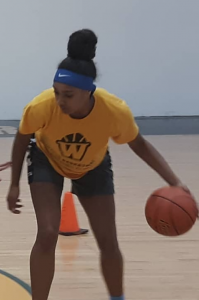 The initial nervousness waned as the season progressed, but it didn’t happen overnight.” “I had to figure out how to ‘lock-in’ and I don’t think I really figured that out until the end of the season,” she explained.

Once she figured out how to mentally lock-in on what she needed to do in each game, Jadyn began to reach her potential. In a game against the #1 ranked team in the state, Jadyn poured in 22 of her teams 37 points. While the final result of that game wasn’t what Jadyn or her teammates wanted, it was proof they were moving in the right direction.

Of course, off the court there were emotional pressures she had never experienced. Teammates, coaches, parents, and referees all had their own opinions and expectations of how Jadyn should play. Learning how to remain true to her game and still be an outstanding teammate was challenging. There were definitely ups and downs, but in the end of the day she worked to block out the distractions and focus on what she had be trained to do.

For Jadyn, she attributes her individual success to her Watts training and she was validated by receiving All-League second team honors at the end of the season. A great achievement that she is proud of, but isn’t content with.  She has already begun preparing to take her game to the next level for the 2019 season, by focusing on being more efficient and disciplined on the court.

“I did better than I thought I would, but not as good as I could have” she said of her freshman campaign. “I didn’t understand everything I needed to do to do my best. I’m going to be working on my mental approach this off-season.”

Her mental preparation combined with on going skills training with Watts has her confident and already setting goals for next season.

“I want to average 18 points a game” She says of her initial goals for her Sophomore campaign. “This season was trying to get experience. Now that I have some, I can put that to use and be better.”
Jadyn will continue to put in countless hours this off-season in the gym working with the entire Watts staff to insure she continues to reach her goals.

If you want to excel and make an impact on your team like Jadyn, join us for a class, camp or private training. Click HERE to learn more become a Gamechange. For Life!

Help Your Kids Overcome Distractions & Achieve Their Goals January 15, 2020
Giving Kids The Room To Fail To Grow February 10, 2020
4 Steps to Expand Your Role This Season January 11, 2020