Most Important Basketball Stats Every Player Should Know 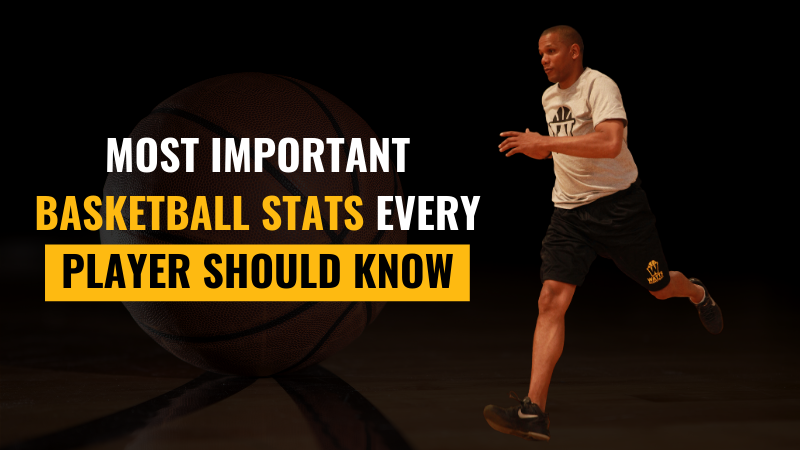 Basketball may seem like a simple shoot-and-defend kind of game to the untrained eye, but there is more to it in reality. The intricate side of the sport often comes into view when a player or team evaluation occurs. So, it should come as no surprise that knowing the most important basketball stats is crucial for athletes and budding talents alike.

Statistical data has also been utilized to track and assess player development. So, in case you are looking to have a better assessment of your on-court performance while elevating your game in the process, here are several stats that you should take into account.

When it comes to evaluating a hooper on the court, one of the most relied upon metrics in tournaments and leagues is the Player Efficiency Rating or PER. It is a per-minute measurement of a player’s productivity, which was pioneered by ESPN columnist John Hollinger. As to how he puts it, the rating system “sums up all a player’s positive accomplishments, subtracts the negative accomplishments, and returns a per-minute rating of a player’s performance.”

PER is quite difficult to calculate; but when the league you are playing at produces stat sheets for every match, make it a point to check it out in order to know your effectiveness each time you suit up and perform. This is also often used by coaches to decide on player rotations and playing time.

Still, make no mistake: While it is an impactful advanced point value system, it should not be considered the be-all, end-all stat. The reason for this is the lack of defensive information to take into account. Blocks and steals are the only factors calculated in the formula, which is not enough to paint a complete picture of the impact of an individual.

Be that as it may, this is one of the most important basketball stats, so make good use of it for self-assessment.

It has long been known that Basketball is a game of points. The team that scores the most and prevents the other squad from converting baskets in a match takes home the victory. So, it goes without saying that great offense and defense are key ingredients for achieving success on the court.

For this exact reason, a team needs to determine whether or not they are efficient or inefficient on both ends of the floor. And the most convenient method to lean on is statistics, where offensive (ORtg) and defensive (DRtg) rating comes into play.

The rating on offense will show a team the points it scored per 100 possessions. The rating on defense, on the other hand, will reveal the points allowed by a team per 100 possessions. Such information can help a team decide on the style of play to incorporate. For example, if the rating said that a squad is an elite defensive unit with an average offensive arsenal, the team could try to sharpen its scoring weapons in practice.

As an individual, using such information can help you decide where to step up for your team. If the squad you are in lacks impact on one end of the floor, shifting your focus on that side can increase your chances of winning. The willingness to adjust through the help of one of the most important basketball stats may also boost your stock as a team player in the long run.

Imagine being in a situation where you are the one tasked to take the last shot in a game where your team is down by a point with the clock winding down. What would you do? Will you pull up from deep or dribble closer to the basket for a short jumper? Or perhaps you are opting to bait a defender and fish for a foul to have a chance at the free-throw line?

Regardless of the outcome, it all boils down to choosing the shot you make the most, and the best way of knowing this is through the True Shooting Percentage, which takes into account your field goal percentage including three-pointers and free throws. This helps you find out where your hot spots and cold zones are on the offensive end. So, when the situation where you need to make a shot arises, you will know where to position yourself and what kind of shot to rely on.

This will also help you refine your marksmanship on the court. Since you have gained the knowledge on where you least convert baskets, you can work on those areas and come back a better shooter the next time out. All in all, there is no denying that True Shooting Percentage is among the most important basketball stats.

In recent times, the free throw has become an integral part of a player’s offensive arsenal. After all, the sport nowadays has provided more caution for physical contact with the implementation of rules such as hand-checking. With a high frequency in fouls called, the more chance you can get to convert on the charity stripe.

For this exact reason, a player must keep track of one’s efficiency in making arguably the easiest shot in Basketball. In order to do this, you should keep tabs on your free throw percentage and calculate it. Unlike the others on this list, the math on this one is simple. Just divide your free throws made by the number of attempts.

As one of the most important basketball stats, free throw percentage is often overlooked by players. So, make sure to track it and take the initiative to improve when your shooting rate is below the desired efficiency.

While the eye test is more than enough to determine a player’s importance on the court, there is impactful information that only analytics can provide. So, take the time to delve into this side of the sport and learn the most important basketball stats.